Gastric bypass surgery is an increasingly common medical procedure used to treat a variety of ailments, such as morbid obesity. In gastric bypass surgery, the stomach is divided into two separate sections – a small upper pouch, and a far larger lower pouch. The small intestine is connected to both pouches, allowing for normal digestion.

In gastric bypass surgery, the body is basically tricked into believing that the small upper pouch is the entire stomach. Because of this, an individual who has had the surgery will experience the sensation of being ‘full’ a lot quicker than they otherwise would, and will consume less food. This leads to weight loss, and improved health.

The Need for ERCP 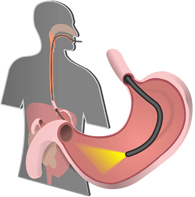 ERCP is a surgical technique commonly used to treat gallstones, and pancreatic problems, as well as other intestinal issues. Standard ERCP involves the simultaneous use of both endoscopy and fluoroscopy to identify and treat issues inside the stomach or its surrounding organs.

As individuals who receive gastric bypasses are often overweight and have unhealthy diets, they frequently suffer from pancreatic and gallbladder related issues. ERCP is the principal surgical technique used to treat these concerns.

However, the presence of restructured anatomy in an individual who has undergone Roux-en-Y gastric bypass (RYGB) makes standard ERCP a lot more difficult to perform correctly.

Standard ERCP relies on an instrument called a duodenoscope, which is used to access the duodenum. However, due to the restructured anatomy of a patient who has had an RYGB, the duodenum is no longer accessible in this manner.

Some specialized instruments with longer wires have been used to perform the standard process, but most doctors agree that the quality of the instruments is insufficient and endoscopy is simply not designed to be used this way.

For this reason, in urgent cases involving patients who have already received RYGB, many surgeons will resort to using a technique called laparoscopy-assisted ERCP. This involves actually making an incision into the lower stomach portion of the patient, and performing the procedure using standard instruments.

Laparoscopy-assisted ERCP comes with more risk than the standard procedure. Because it involves entering the stomach through incision, it needs to be done in an operating theater where fluoroscopy tools tend to be inferior. There are also logistical issues, as the ERCP surgeon must work in tandem with a laparoscopy surgeon.

In addition to this, there are the added complications and concerns brought on by incision, and the risk of infection or the unintended perforation of organs over the course of the surgery. While surgeons skilled in performing the standard procedure ought to be able to perform laparoscopy-assisted ERCP too, the risks are greater in these instances and a prospective patient ought to be fully aware of this in advance.

The Fight Against Negligence

There are alternatives to laparoscopy-assisted ERCP that can be used if the case is not urgent. For this reason, a surgeon should only take the additional risk of laparoscopy-assisted ERCP if it is absolutely necessary. The surgery should still be within the remit of any competent ERCP surgeon, but with the enhanced risk in this situation, any carelessness on the surgeon’s behalf is likely to have more severe consequences.

For this reason, it is vital that individuals who have undergone this surgery when it wasn’t necessary, or who have had complications arising from surgeon mistake, come forward and seek redress. By doing so, you can attain justice for yourself, and protect everyone else who could find themselves in a similar situation in the future.