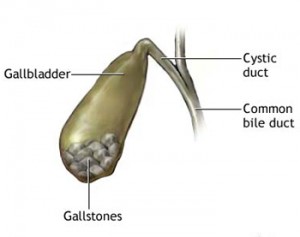 The gallbladder stores bile, which is created by the liver and aids in digestion. This bile sometimes crystallizes and forms stones, called gallstones. Approximately one million Americans are affected by gallstone disease every year.

Gallstones are formed when the components of bile crystallize. Cholesterol is the most common component that crystallizes, and about 80 percent of those affected by gallstones have cholesterol gallstones. Gallstones may also be formed by the crystallization of bilirubin, but this type of gallstone is typically only present in patients that have liver disease or certain blood diseases. What makes a person more inclined to develop gallstones is not yet understood, but women over the age of 40 are at a higher risk of developing gallstones. People of Native American or Mexican descent may also be more susceptible to development of gallstones.

Factors that may contribute to the development of gallstones include:

If gallstones stay in the gallbladder, they may cause no symptoms and are often not detected until a test is done for a different issue. These are called silent gallstones and can usually go untreated without complications. However, if a gallstone leaves the gallbladder and travels into the bile duct, it may cause pain and blockage of the duct. This blockage can lead to infection and inflammation and should be treated as soon as possible.

If a gallstone has begun to travel through the bile duct, it will usually cause pain on the right side that can last for minutes or hours. Pain may also be felt in the upper back and between the shoulder blades. If infection occurs, the skin may jaundice and patients may experience nausea and vomiting. Fever may also develop. If left untreated, the infection can spread to the pancreas and can become life threatening. Patients are encouraged to seek medical treatment as soon as possible if these symptoms are present.

To verify the existence of gallstones in the bile ducts, physicians may perform the following tests:

• CT scans
• MRIs
• Ultrasounds
• Endoscopic ultrasounds
• ERCP, a procedure which uses dye and an endoscope inserted through the mouth to check for gallstones
• Cholescintigraphy, an injected radioactive tracer

If an infection is detected, physicians may treat the infection with antibiotics. In order to remove gallstones, surgery may be performed or ERCP can be used. In many cases, if gallstones are suspected, ERCP may be used for both diagnosis and treatment. ERCP is preferential to surgery because there are no incisions made, so recovery time is much faster. If stones are small enough, a pill can sometimes be taken to dissolve them.